skip to main | skip to sidebar

...at least tentatively.  Sunday's short MTB ride was "uncomfortable" not helped by the stonking wind that meant a constant battle with the bike even on smooth, flat bits.  Bumpy descending was still teeth clenching.  I rode to work yesterday and that went pretty well, swimming is just about ok if terminally boring but have had to use the granny steps to get back out of the pool or risk a comedy face plant back into the water.

I've not run much or done anything else as its quite amazing how much the muscles around the ribs are used, they're not called core muscles for nothing!   Now that the pain in my ribs has pretty much subsided to a dull roar I realise that my right hip and groin muscles are still a bit sore  and bruised really so on a sensible note I won't be doing the Etape Du Dales this weekend its too hard a ride for me to contemplate unless at good fitness, especially as it looks like it may be another windy day on Sunday (but sunny, pah!).  I've not done anything in the way of tough road rides since the beginning of April.

Time to start building fitness up...whilst resisting my usual tendency to overdo it, aiming for mid June to do something but don't know what yet.   Anyway dust and sunshine and actually looking where I'm going: 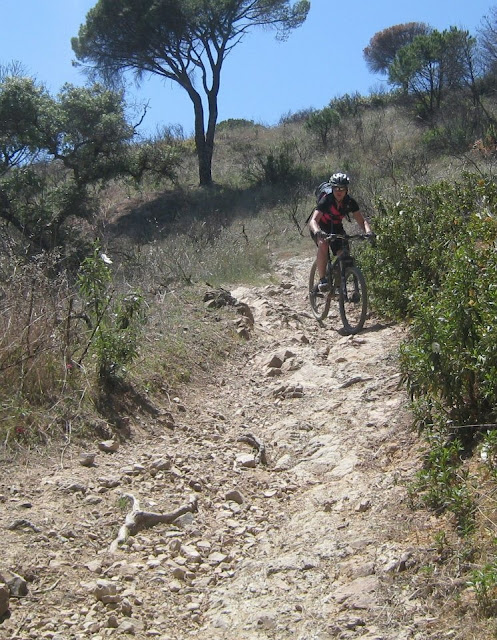 Think I've bashed up my intercostals good and proper, it's not quite sore enough to have cracked/broken the rib but just tried a gentle spin on the shopping bike and rolling off a centimetre high kerb stone (i.e the driveway) was not pleasant.  Bike back in garage, about to go get more ibuprofen.  Perhaps manhandling the sofa about this morning was not a good idea.

Another couple of days of complete nothingness ahead (swimming, running even walking are out).  Injuries often expensive for me....looking at new shiny frames, nothing better to do.
Posted by Julbags at 11:40 AM 1 comment:

Coming back from sunny, dry 24C Spanish riding to this weekend's awful weather was a bit of a shock to the system that's for sure.  Had a great week with Joyriders out in Spain, dusty trails, challenging rocks, a few nice long climbs and the small matter of a great big, full on, over the bars Superman splat onto some pointy rocks which meant I abandoned the last days riding after about 10 minutes...oops a daisy.

I've never been in so much pain with an MTB crash and I don't think I've ever actually had to abandon a ride before and never had to be transported out (just the van, nothing more serious), I could barely stand never mind pedal and couldn't lift my right knee at all.  I've badly bruised my right "hip flexor area"  (so pleased I'm not a bloke that's for sure) and my ribs ache but I've not broken anything at least and can now sort of see the funny side.  Well, I can certainly see the funny side of the hokey cokey I was trying to perform to get in the van, I couldn't get a combination of arms and legs that worked without seeing stars pain, Jez had to shove me in.

I need to do some examination of why I go OTB on the Titus so often, not paying attention to riding the correct rubble free line over a drop is up there as is the fact that the forks are in their death throws but its more than that.  Once the trail gets steep I'm always verging on going over and I don't feel that way on the 456.

I'm hoping to be back on the bike by the end of the week, start working off the week's wine and beer consumption.  Will hopefully update with more on the holiday later though there was a bit of a fail on the photo taking front when riding as I was enjoying myself/being mildly terrified too much.  Took loads on our day off wandering round Cordoba but its not quite the same.
Posted by Julbags at 10:57 AM 1 comment: